Who Invented the Internet?

Over the years a handful of charlatans, mostly political figures, have occasionally made extravagant claims regarding the origins of the Internet. One constantly hears both main stream and independent media erroneously referring to social media platforms as "the Internet". This begs the question: what is the Internet? Looking at the Wikipedia definition: "The Internet (or internet) is the global system of interconnected computer networks that uses the Internet protocol suite (TCP/IP) to communicate between networks and devices"1. Notice the words "networks and devices." These two words refer to physically tangible equipment such as computers and routers. The social media platforms basically comprise applications (or software) running on some (but not all) of those computers connected to the Internet.

Most of the world's Internet connected computers run many other applications - applications that deal with everything from banking to industrial process control to telemetry from aircraft in flight2. The idea that the Internet consists of just social media cannot but appear totally absurd to anyone with even a modicum of information technology knowledge. Now might be an auspicious occasion to give credit to a few of the major contributors to the electronic information systems known as "the Internet".

The Failure of Euclid

Throughout history Euclid's proof of Pythagoras' theorem has proven a stumbling block to generations of middle school students. Educators have noted that the obscurity of Euclid's proof has blocked students from advancing in mathematical understanding.

The distance formula derived from the Pythagorean Theorem provides a cornerstone in the development of the integral and differential calculus, and in real analysis. Of all mathematical ideas, the Pythagorean Theorem has arguably been the most appropriated by the Mystery Babylon schools of the occult universe. As a symbol the theorem is fundamental to Freemasonry, considered as representing the Isis-Osiris-Horus trinity.*

It is sad that so many first rate minds have gone down the rabbit hole of occultism, rather than view the Pythagorean Theorem as simply a basic tool of mathematics, somewhat like a screwdriver or hammer is to a carpenter. One wonders if the unnecessary complexity of Euclid's proof is actually intended to drive the young mathematical explorer into occultism. The theorem can be proven in just two steps in such a simple and intuitive manor as to open the door of transparency to all higher mathematics.

The Pythagorean Theorem Made Easy 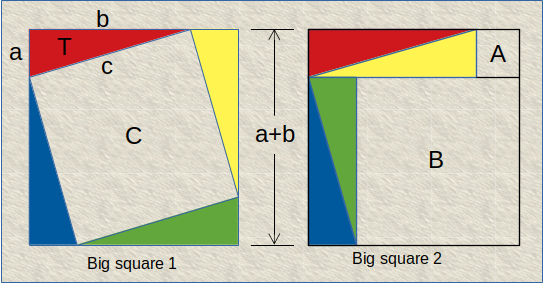 Now add up the areas in big square 1, consisting of the four triangles and square C

Next add up the areas in big square 2, consisting of the four triangles and squares A and B

Since the two big squares are the same size, their areas are equal to each other. Therefore

Subtract out the four triangles from both sides of the equation and rearrange, leaving

which, when expressed algebraically is

which is the conclusion of the Pythagorean Theorem.

The Question of the Matrix

(Pardon me for a bit of desiderata.)

So, the real question is not whether the Matrix exists, but rather: whether I'm gonna take the red pill, or the blue pill? This question is not just a matter of minor discourse; the question takes us to the highest realm of spiritual discourse.

Apologists, in their discourse, actually do explain a lot of how the world actually works. Go figure...

The Great god of Cool

Once touted as the three great gods of the American people:

One of these has to be replaced with the identity politics god of "cool". When did this word, in its slang sense, enter the common vernacular? During the nineteen sixties hippy movement most certainly. By the turn of the century the slang form of this word found itself completely cooped by the entire tech community.

Going back to the nineteen sixties, the slang form first began to be used by hippies to indicate acceptable conformity. That is, used to indicate a thought, idea, action, or behavior that not only conforms to, but actually highlights accepted "community standards".

So what can we say? The slang form of the word "cool" most certainly came out the the socialist, radical left, which part and parcel was behind the rise of the nineteen sixties hippy movement. Is it any wonder that this slang usage was subsequently picked up by the radical leftist, west coast tech community?

George Spencer Brown and The Laws of Form

Axiom 2: To enter into a distinction and then to exit does not effect the surrounding space in which the distinction stands. That is to say, to cross a boundary and then to recross the boundary indicates the unmarked state.

Initials of the Arithmatic:

Likewise, using letters to represent any possible arithmetic expression in the calculus of indications, an algebra may be defined. As initials of the algebra, take J1 and J2 below, both provable as theorems in the arithmetic. Example 2 shows the demonstration of a consequence in the algebra. Readers familiar with Boolean algebra may recognize this demonstration as a proof that negating a negation negates the negation. That is,

Initials of the Algebra:

G Spencer Brown's profound and subtle mathematical development of this subject, The Laws of Form, may be found here.

Perhaps one of the most egregious occurrences of undistributed outlook manifests in expressions of absolute hatred towards those who display arete, virtue or excellence of any kind. Arete, as the ancient Greeks called it, means "excellence of any kind". Such excellence may be proficiency in archery, fighting, oratory, debate, and even righteous living. However, throughout history there has always been a class of people who cannot "distribute" appreciation of excellence, as they apply it to their own persona, to the appreciation of excellence in the personas of other people.

The difficult problem for those (especially youth) who do, in fact, manifest in themselves and appreciate in others a high degree of excellence, is that they tend to assume such outward appreciation is universal. Unfortunately and quite arguably, externalized appreciation of arete is definitely not universal. Perhaps the saddest thing of all is the archetypal image of the devastated youthful hero, betrayed and destroyed by an insanely jealous rival innocently regarded as a close friend. Many instances in classical and biblical literature can be cited.

As a number of astute observers have noted it is almost as if a radical left has arisen that absolutely hates excellence of any kind and can only cast invective and slander at anyone deemed virtuous in any way. Nowhere has this become clearer than with so called "social justice warriors" who rabidly attack as "privileged" any individual manifesting any form of excellence not condoned by the "party line". Those forms of excellence that are permitted by the "party line" appear, oxymoronically, to be the very forms of non-excellence which lead, in reality, to weakening and dissolution of the naturally strong and proficient.

As stated by William S Burroughs in his advice for young people: "There is a type of person that will [explicative meaning ravish, destroy] anything and everything that they touch...it is absolutely imperative, such people must be avoided at all cost."

Within Conway's Game of Life, many astoundingly complex, dynamic yet stable patterns produce new insights into the world of the possible. To see some examples of these amazing patterns view the beautiful presentation in the video "epic conway game of life".

Perhaps the future will see such forms of "experimental computation" applied to social dynamics among human beings. Such studies might reveal where truly stable yet dynamic patterns can occur. This is a great danger to the neo-feudal globalists. Their plans for social dynamics may end up shown to be inherently unstable, leading to decay and stasis.

Whereas, some totally unexpected patterns may emerge that lead to both growth and stability. Not only that, but these might be patterns that can grow organically from a minimal set of rules. This is why minimal sets of rules, such as the Ten Commandments, have been historically for millennia so highly regarded.

Experimental Computation and Emergence of the Tech Age

In 2003 Stephen Wolfram published A New Kind of Science, a best selling book that has vastly fueled the experimental computation movement.

I really think that if anything can bring down the neo-feudalist globalist movement, it is the growing movement of experimental computation. The applications are so broad across the sciences and so leading to unexpected results that the neo-feudalist elite will no longer be able to hide from us advanced technologies. In fact, I think that cellular automata gives us the closest abstract visualization we will ever have of artificial intelligence.

To see what can be done with cellular automata, even so simple as Conway's Game of Life, check out the video "epic conway's game of life".

In contrast, undistributed outlook occurs when a group applies a universal principle to other groups differently than that group applies the principle to itself. Herein can be seen, especially in political debate, all manner of logical fallacy. In particular, undistributed outlook occurs most frequently when it comes to the theory and practice of free speech.

All fascists oppose freedom of speech.
The opposition are all fascist.
All opposition should be shouted down and not allowed to speak.

As is so often the case, theory and practice turn out to be two very different things. A group that screams when it feels its own freedom of speech curtailed will viciously attack those who express differing points of view. This behavior constitutes a feudalistic practice that places appeal to emotion above logical thought and reason. Not only is undistributed outlook self serving, it is also quite counter-productive. Viciously denying the rights of others so often ends up being a double edged sword, as when the tables turn, others may in turn feel free to deny your own rights. This is another way of saying that two wrongs do not make a right.

The problem of undistributed outlook also relates to the problem of stereotyping, as stereotyping almost always leads to undistributed outlook and acts as an impediment to understanding. Especially, in politically charged debate, stereotyping almost always results in complete communication break down. How can one rationally debate an issue if one is accused of bias solely based on factors beyond anyone's control, such as race and/or gender? Of course, such stereotyping is actually an instrument for preempting all rational debate, and as such, denies freedom of speech. Again, stereotyping is a feudalistic practice totally incompatible with the Tech Age paradigm. In the Tech Age, where racal and (non-physical) gender differences have been shown scientifically unsupportable and, indeed artificial, how can such stereotypes be taken seriously?

In conclusion, social and political stereotyping, along with undistributed outlook, cannot be considered instruments of change compatible with the dawning Tech Age.

The answer to paranoia is comedy.

Times of great change often seem to be accompanied by times of paranoia. What is the answer to this state of affairs? Quite simply put: comedy. This past year the world has seen quite a lot of change, and change always brings a lot of uncertainty. Uncertainty can lead to paranoia - fear of the unknown. The answer? See it as all crafty, cosmic comedy. This is where the entertainer has an advantage. The entertainer can see it all as show biz.

* No word has yet been found or coined to describe that segment of humanity actively involved in bringing about the Tech Age. So, for convenience, I'm using the word "Promethean", after the god who brought fire (technology) to mankind.